One of the biggest joys in my life is watching my children participate in their activities.  However, two back-to-back dance weekends with a baseball tournament thrown on top is a bit much!  I will say I learned the fine art of conserving energy to sustain enough to get me through three days on the second weekend.  My sweet friend Erin and her family hosted us at their house so we didn’t have to drive back and forth to Lees Summit during the breaks.  It was fun!  We did some crafty little projects and she inspired me to quit doing whatever I do at home and squeeze in the craftiness I have in me.

The weekends were very fun and the kids did an amazing job dancing!  Whitney had a blast during her little spotlight solo in the big production number and the second weekend it earned a diamond!  Yeah!  I don’t remember many “1st” place awards for our big number we do each year so that one is a special one.  Two of her dances, “Let Us Out” in which she plays an angry elephant and “Fish Fry” which she plays a fish won Entertainment awards which is a judges choice award!  Those are always very special to receive because they don’t hand them out to any old dance.

While we were laying low during our breaks I made two fun little plaques to commemorate Whitney and her dear friend, Zoie’s first solos.  I copied pictures I had taken and jazzed up the area around it.  I think they turned out pretty cute and I know they will be treasured.  This was a monumental year for Whitney’s dance career and I know will be remembered as a highlight. 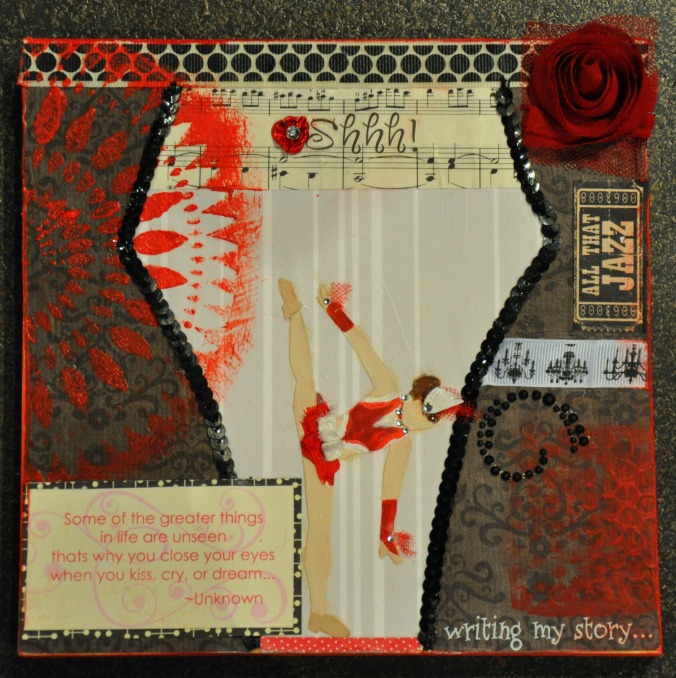 Zoies beautiful pose during her dance

Close up of her image

ENJOY!  I SURE ENJOYED MAKING THEM!